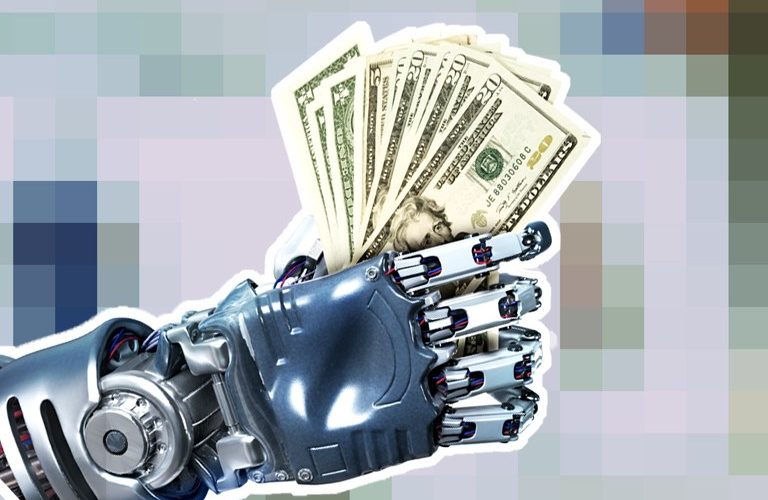 The Fourth Industrial Revolution is upon us. AI-led automation is not only here, it’s here to stay. But what of the future of work if so many jobs are to be automated? More specifically, what of people’s futures if traditional incomes cannot be guaranteed?

If an AI revolution is truly set to alter the work landscape as we know it, could a scheme such as Universal Basic Income (UBI) be an appropriate avenue to redress (some) balance? Are there other alternatives? Is the ‘symbiosis’ between AI and something akin to UBI inevitable? This article will briefly delve into this matter.

Artificial Intelligence / machine learning is set to be one of the biggest disrupters that humanity has ever faced. This is certainly true of how people will work and what the very notion of work will be in the not-so-distant future.

Many jobs and job titles are set to disappear, even those considered white collar and prestigious. Take Deutsche Bank, which announced in late 2019 that it will replace up to 18,000 jobs with robots by 2022. Mark Matthews, head of operations for the bank’s corporate and investment division, confidently stated how machine learning algorithms would “massively increase productivity” and “redistribute capacity”. It is part of a $6.6 billion savings initiative over the next three years the bank dubs ‘Operations 4.0’.

But just how disruptive will AI be to jobs as we know them today? Think very. AI will not so much disrupt as rip apart many job sectors. The projected statistics are all over the place – because basically no one can know for sure the extent of the upheaval – but they are all very significant, even frightening.

Oxford academics Carl Benedikt Frey and Michael Osborne estimated in their 2013 study that 47% of American jobs will be at high risk of automation by the mid-2030s. Later studies by McKinsey and PricewaterhouseCoopers  estimated that about one-third of all current jobs worldwide would be impacted by 2030. Interestingly, the number was even higher (40%) in the United States and Japan (almost 50%) for those who would lose their current jobs due to automation.

Nor should UBI be considered a ‘First-World luxury’ that only developed economies can afford to have. Developing and emerging economies are also at risk of the disruptive force of AI, as can be seen below: 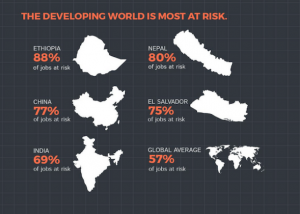 The graph below provides some insight as to what are some of the typical jobs that will be under threat by AI within the next decade or so, and those that are ‘safe’ – for now:

Furthermore, women will be as impacted as men. For example, according to the McKinsey Global Institute, between 40 and 160 million women worldwide may need to transition between occupations by 2030 due to the fact that they comprise a large proportion of clerical-type jobs set to be automated.

Different parts of the world, as well as different regions within countries, will be affected differently and to varying degrees depending on their ‘AI adaptability’. In its July 2019 study titled The future of work in America: People and places, today and tomorrow, ‘McKinsey stated that, “Automation is not happening in a vacuum, and the health of local economies today will affect their ability to adapt and thrive in the face of the changes that lie ahead.”

Nevertheless, the future of work as we know it is altered, different, much of it kaput. Enter Universal Basic Income.

Universal Basic Income is not new. The idea that the government would pay every adult citizen a fixed sum or ‘salary,’ regardless of wealth, employment income or employment status, is a 500-year-old concept. Thomas More proposed a version of it in his 1516 opus, Utopia. Other advocates of it have included philosophical luminaries such as Thomas Paine, John Stuart Mill, Bertrand Russell, and Martin Luther King, Jr. Even Richard Nixon’s administration tried unsuccessfully to get a basic-income benefit through Congress !

For many who support UBI today, the reasons are simple: it would be a financial stop-gap for the onset of AI in the world of work. Elon Musk made this point at the World Government Summit in Dubai in 2017 when he said that the pace of technological change was leading to “a massive social challenge. And I think ultimately we will have to have some kind of universal basic income. I don’t think we’re going to have a choice.”

AI guru Chintan Trivedi goes further: He believes that the ‘AI community’ itself should actively advocate for UBI. Trivedi sees UBI as a vital cushion for those who lose jobs to AI and need to retrain themselves “for the newly evolved market”.

UBI can pick up the slack for the detriments of AI – not perfectly, it’s true, but certainly some of it. Here are some factors to consider regarding UBI:

Alternatives to and Critiques of UBI

There are those that criticize UBI as being either utopian or oudated. The latter is the reason why Steve Fuller, the author of Humanity 2.0 and a professor in Social Epistemology at Warwick University, England, stated that UBI is “an old socialist welfare state idea. We do not live in an old socialist welfare state world anymore. And as a result, we need a renegotiation of the terms.”

Fuller’s proposed ‘renegotiation’ of how people can be buffered from the disruption of AI is that everyone should be financially compensated for the personal data that is appropriated by Big Tech and allied companies. Those dividends will far outweigh the limited ‘socialist’ benefits of UBI, Fuller contends. It’s certainly an idea that has been gaining much traction in recent times. Why indeed should our personal data be entirely uncompensated by those who financially benefit – and hugely so – from said data?

Futurist Jolene Creighton counters his argument by stating that ensuring that corporations pay for people’s data “could make for a legislative and regulatory nightmare”. Creighton begs the question: “How much should a company have to pay for a person’s email address or phone number or clothing preferences?” And, it can be further contended, who exactly will decide that? If UBI is ‘socialism,’ then what Fuller proposes is wishful thinking.

There are also those who advocate a type of ‘universal basic benefits’ system by which people benefit by ‘savings’ due to certain essentials being publicly financed. So, for example, one such model calculated that each person would in effect gain $1500 per month in the US if three programs were to be essentially subsidized by the government: Medicare For All, mass transit, and additional housing resulting in lower rental costs. There would be no need to pursue the $1000 monthly ‘freedom dividend’ being advocated by Democratic Party presidential primary upstart, Andrew Yang. This ‘benefits’ model would actually put $500 more into each person’s pocket.

The ‘universal basic benefits’ model has its own flaws, however. For one thing, it’s very American-centric. How could this benefit people who already live in countries such as Germany, Finland and Denmark that already have established social welfare systems? It’s also difficult to predict what the effect of ‘cheaper’ public housing will actually have on rentals, especially in a country such as the US where property speculation is so ingrained in the socio-economic fabric.

There are also those that argue that all the fears regarding AI’s decimation of jobs is unfounded. Marcel Fratzscher, the economist and head of the German Institute for Economic Research, is one such ‘pragmatic’ critic of UBI. He cheerily proclaims that, “There will always be enough jobs – just the nature of them will change”. He believes that AI will simply foster the creation of as many jobs as it destroys.

Fratzcher does acknowledge, however, that there will be “a thinning out of the middle class in most Western countries, because those middle-class jobs are the easiest to replace through technological change”.

So, could AI and UBI be considered somehow co-dependent, i.e. symbiotic? Theoretically, no. AI certainly won’t require UBI in order to flourish. AI’s entry into the workforce is guaranteed, regardless of what measures are taken to compensate for the resulting loss of jobs and income, and UBI shouldn’t be viewed solely within the context of AI and automated work.

Instead, AI and UBI as symbiotic relationship should be viewed within the context of near-future stark reality. That is, AI itself – and those who will no doubt make vast fortunes out of it – could be at grave risk should there be insurrection by the jobless multitudes, unless there is some form of viable safety net in place. Likewise, UBI will come to the fore precisely because of its ability to temper the socio-economic ravages that will occur with unchecked AI/automation.

In the society of the near future, AI and UBI, or some variation thereof, will depend on each other so that the latter can hopefully balance out the former. Unlike today, the word ‘co-dependency’ will have an inevitable, decidedly positive ring to it.