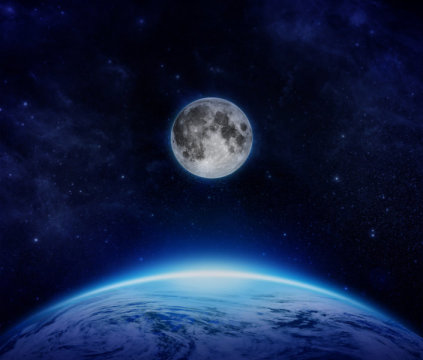 Collision may have formed the Moon in mere hours, simulations reveal

Billions of years ago, a version of our Earth that looks very different than the one we live on today was hit by an object about the size of Mars, called Theia — and out of that collision the Moon was formed. How exactly that formation occurred is a scientific puzzle researchers have studied for decades, without a conclusive answer.

Most theories claim the Moon formed out of the debris of this collision, coalescing in orbit over months or years. A new simulation puts forth a different theory — the Moon may have formed immediately, in a matter of hours, when material from the Earth and Theia was launched directly into orbit after the impact.

“This opens up a whole new range of possible starting places for the Moon’s evolution,” said Jacob Kegerreis, a postdoctoral researcher at NASA’s Ames Research Center in California’s Silicon Valley, and lead author of the paper on these results published in The Astrophysical Journal Letters. “We went into this project not knowing exactly what the outcomes of these high-resolution simulations would be. So, on top of the big eye-opener that standard resolutions can give you misleading answers, it was extra exciting that the new results could include a tantalisingly Moon-like satellite in orbit.”

The simulations used in this research are some of the most detailed of their kind, operating at the highest resolution of any simulation run to study the Moon’s origins or other giant impacts. This extra computational power showed that lower-resolution simulations can miss out on important aspects of these kinds of collisions, allowing researchers to see new behaviors emerge in a way previous studies just couldn’t see.

A Puzzle of Planetary History

Understanding the Moon’s origins requires using what we know about the Moon — our knowledge of its mass, orbit, and the precise analysis of lunar rock samples — and coming up with scenarios that could lead to what we see today.

Previously prevailing theories could explain some aspects of the Moon’s properties quite well, such as its mass and orbit, but with some major caveats. One outstanding mystery has been why the composition of the Moon is so similar to Earth’s. Scientists can study the composition of a material based on its isotopic signature, a chemical clue to how and where an object was created. The lunar samples scientists have been able to study in labs show very similar isotopic signatures to rocks from Earth, unlike rocks from Mars or elsewhere in the solar system. This makes it likely that much of the material that makes up the Moon originally came from Earth.

In previous scenarios where Theia sprayed out into orbit and mixed with only a little material from Earth, it’s less likely we’d see such strong similarities — unless Theia was also isotopically similar to Earth, an unlikely coincidence. In this theory, more Earth material is used to create the Moon, particularly its outer layers, which could help to explain this similarity in composition.

There have been other theories proposed to explain these similarities in composition, such as the synestia model — where the Moon is formed inside a swirl of vaporized rock from the collision — but these arguably struggle to explain the Moon’s current orbit.

This faster, single-stage formation theory offers a cleaner and more elegant explanation for both these outstanding issues. It could also give new ways to find answers for other unsolved mysteries. This scenario can put the Moon into a wide orbit with an interior that isn’t fully molten, potentially explaining properties like the Moon’s tilted orbit and thin crust — making it one of the most enticing explanations for the Moon’s origins yet.

Getting closer to confirming which of these theories is correct will require analysis of future lunar samples brought back to Earth for study from NASA’s future Artemis missions. As scientists gain access to samples from other parts of the Moon and from deeper beneath the Moon’s surface, they will be able to compare how real-world data matches up to these simulated scenarios, and what they indicate about how the Moon has evolved over its billions of years of history.

Beyond simply learning more about the Moon, these studies can bring us closer to understanding how our own Earth became the life-harboring world it is today.

“The more we learn about how the Moon came to be, the more we discover about the evolution of our own Earth,” said Vincent Eke, a researcher at Durham University and a co-author on the paper. “Their histories are intertwined — and could be echoed in the stories of other planets changed by similar or very different collisions.”