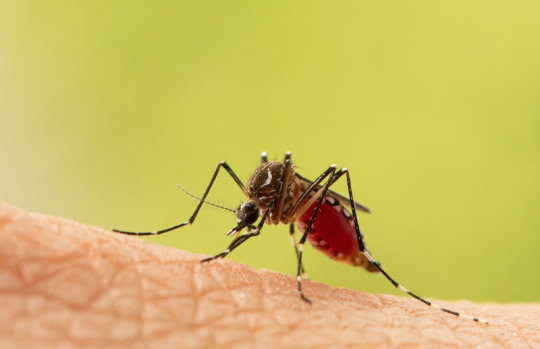 When female mosquitoes are looking for a human to bite, they smell a unique cocktail of body odors that we emit into the air. These odors then stimulate receptors in the mosquitoes’ antenna. Scientists have tried deleting these receptors in attempts to make humans undetectable to mosquitoes.

However, even after knocking out an entire family of odor-sensing receptors from the mosquito genome, mosquitoes still find a way to bite us. Now, a group of researchers, publishing in the journal Cell on August 18, found that mosquitoes have evolved redundant fail-safes in their olfactory system that make sure they can always smell our scents.

“Mosquitoes are breaking all of our favorite rules of how animals smell things,” says Margo Herre, a scientist at Rockefeller University and one of the lead authors of the paper.

In most animals, an olfactory neuron is only responsible for detecting one type of odor. “If you’re a human and you lose a single odorant receptor, all of the neurons that express that receptor will lose the ability to smell that smell,” says Leslie Vosshall of the Howard Hughes Medical Institute and a professor at Rockefeller University and the senior author of the paper. But she and her colleagues found that this is not the case in mosquitoes.

“You need to work harder to break mosquitoes because getting rid of a single receptor has no effect,” says Vosshall. “Any future attempts to control mosquitoes by repellents or anything else has to take into account how unbreakable their attraction is to us.”

“This project really started unexpectedly when we were looking at how human odor was encoded in the mosquito brain,” says Meg Younger, a professor at Boston University and one of the lead authors of the paper.

They found that neurons stimulated by the human odor 1-octen-3-ol are also stimulated by amines, another type of chemical mosquitoes use to look for humans. This is unusual since according to all existing rules of how animals smell, neurons encode odor with narrow specificity, suggesting that 1-octen-3-ol neurons should not detect amines.

“Surprisingly, the neurons for detecting humans through 1-octen-3-ol and amine receptors were not separate populations,” says Younger. This may allow all human-related odors to activate “the human-detecting part” of the mosquito brain even if some of the receptors are lost, acting as a fail-safe.