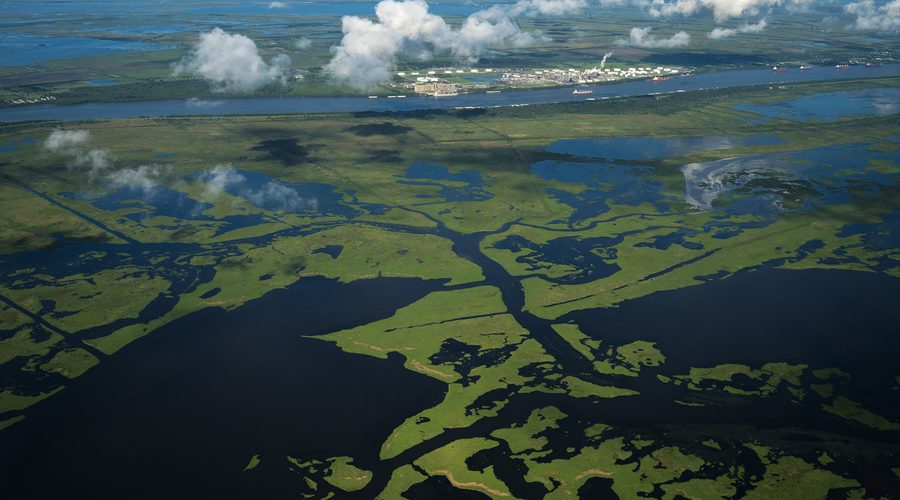 The creation story told by the Chitimacha people in Louisiana describes the world in its earliest days as a wide expanse of water. Then the Great Creator instructed crawfish to dive down and bring up a bit of mud. Geologists tell a similar tale, though their sculptor is the Mississippi River: For thousands of years, it dumped soils stolen off the continent into the Gulf of Mexico. Thus the river formed its delta, a vast and muddy and ever-changing landscape where the water once forked into many paths to the sea.

These days, though, the river is largely restricted to one channel. Imprisoned within artificial levees, it’s no longer able to deposit its mud according to hydrological whim; instead, the river spits its sediment into the abyss of the deep sea. The consequences are grim: The existing mudscape is sinking. The ocean is rising. Over the past nine decades, more than 5,000 square kilometers of delta land in Louisiana has disappeared.

Few places are going faster than Plaquemines Parish, which encompasses the muddy land along the river’s final 100 or so kilometers, where New Orleans’ exurbs give way to a smattering of rural communities. (A parish is the local equivalent of a county, a remnant of Louisiana’s French colonial history.) One morning last summer, as we weave in his skiff through the parish’s marshland, Richie Blink tells me that the federal government has recently deleted 30-odd names from local nautical maps. Fleur Pond, Dry Cypress Bayou, Tom Loor Pass, Skipjack Bay: All have become undifferentiated, unlabeled expanses of open ocean.

Now, the state government wants to open a gap in the levee to divert some of the river’s muddy water back into the marshes, allowing the river to resume its old task of construction. Work on the gap could begin in early 2023, assuming that the US Army Corps of Engineers, the federal agency that oversees waterway infrastructure, grants its official approval later this year. The Mid-Barataria Sediment Diversion—which is named for Barataria Bay, where the released river water will build a new “subdelta”—has been under discussion for years, but now, on the eve of destruction, it’s come under a firestorm of criticism from shrimpers worried about their livelihood; homeowners concerned about flooding; and environmentalists dismayed at the potential loss of bottlenose dolphins, a federally protected species. The diversion is intended to build new marshland, but it’s sometimes depicted as the latest assault on the region’s rural communities—which, according to critics, are about to be sacrificed again for the sake of nearby urban New Orleans.

Blink, an ecotour guide, serves on the Plaquemines Parish council and is the sole member who has not voted to oppose the project. “We are facing these massive changes,” he tells me as the solid ground disappears behind us and we speed into open water. Either the diversion will alter the ecosystem, or the loss of land will. One way or another, the parish will have to do something new if it wants to survive. “We have to imagine this delta of the future,” he says.

It strikes me, though, that we’ve often failed to imagine the delta of the present. Despite all the focus on land loss and land building, we rarely pause to discuss what we mean by land. And here in Louisiana, land—and who should control it—is a sometimes squishy idea.

THE MISSISSIPPI RIVER is truly massive, combining three major tributaries that together drain 32 US states and two Canadian provinces, from Alberta to New York to New Mexico. Together, these various tributaries once sent as much as 290 million metric tons of dirt to the Gulf of Mexico each year, stacking it into an ever-growing lobe of land. Eventually, the lobe would grow so long that one of the side channels forking away from the river would become a tempting shortcut for the Mississippi. Lured away, the river jumped—or avulsed, in the parlance of geology—on a roughly millennial schedule, sending its torrent of water down one of these channels, building in a new direction.

This process has yielded a branching network of overlapping sub-deltas that reach like splayed fingers into the Gulf of Mexico. Each sub-delta holds at its center a line of water, an active or abandoned channel of the Mississippi River. The highest ground, rarely more than a few meters above sea level, sits next to these channels; this is where the most mud has been deposited. These “ridges” can stretch for more than 150 kilometers, though they’re just a few kilometers wide. The modern Plaquemines Parish sub-delta began forming perhaps 750 years ago, and was still under construction when French explorers arrived in the late 17th century. The place seemed to consist “of nothing more than two narrow strips of land, about a musket shot in width,” one member of the crew wrote. Over the next century, French settlers marked the growth of the parish by noting how far the riverbank extended past a fort they’d built at the river’s mouth.

A second type of landform stretches like webbing between the fingers: the marshland that makes up most of the coastal landscape. Here, the mud never stacked high enough to break the ocean surface, but it came close enough to allow marsh grass to root. It’s a world of rich organic soils, though rather unsteady: In places, mats of plants float atop the water, unattached to the soils below, so that if you step onto the grass, it will wobble and sink. The delta begins roughly 500 kilometers upstream of the river’s mouth, and as of 1930, covered nearly 20,000 square kilometers—an area almost the size of New Jersey.

The water running through the marshes is fresh inland and grows saltier closer to the sea. Many species—blue crabs, white shrimp—move across this gradient throughout their life cycles, and the marsh, as a result, offers an abundance of life. The ever-shifting landscape makes research difficult, but evidence suggests that people arrived on the ridges even as they were forming, perhaps to establish short-term hunting and fishing camps amid the new marsh.

The colonial records are somewhat sparse when it comes to Indigenous life within the delta. The first French explorers noted various groups, including the Quinipissa, the Yakni-Chito, the Washa, the Chawasha, and the Chitimacha. Archaeological evidence suggests that at the time of contact, people lived in small villages mostly focused on gathering fish and other wetland resources. The delta was an important crossroads, linking coastal travelers with upriver communities; French explorers noted that so many canoes had been dragged across one ridge-top portage that they had produced a “rather good road.” The Choctaw, one of the larger tribes on the land that would become the US South, called this spot, or perhaps the whole delta, Bulbancha—the place of other languages.

The arrival of European settlers brought disease and slave raids and warfare, and by the time the French began keeping solid records in the 18th century, some Indigenous nations had disappeared, the survivors integrating with neighboring tribes. Some groups slipped into corners of the delta rarely traversed by colonists. People from various villages and traditions settled together, and today the US government refuses to officially recognize some of these groups as tribes, since there is no written record of their beginnings.