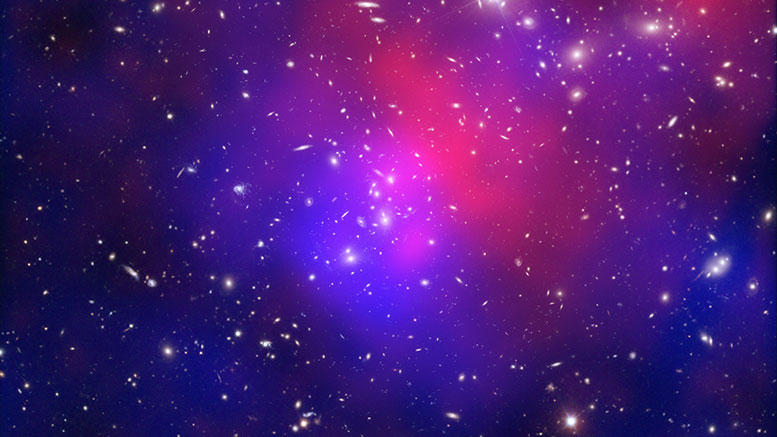 Astrophysicists who have been studying a nearby group of neutron stars that emit excess amounts of x-ray may have found evidence of a long-sought hypothetical particle that can account for the mysterious dark matter in the universe.

In their new paper published in Physical Review Letters on Jan. 12, Benjamin Safdi, Divisional Fellow in the Berkeley Lab Physics Division theory group, and colleagues reported that the elusive particle axion may explain the abundance of high-energy x-rays generated by a group of isolated neutron stars known as the Magnificent Seven.

Axions are theoretical particles that become photons in the presence of a magnetic field. Physicists proposed their existence as an answer to a problem in the Standard Model of particle physics, the framework that describes the interactions of elementary particles.

“The axion was first proposed in the late 1970s to solve this problem called the strong CP problem, which means the negative and positive electric charge distributions inside the neutron are centered around the same point,” study co-author Christopher Dessert, a graduate student in physics at the University of Michigan, said in a statement.

Unlike protons, neutrons, and electrons whose behavior can be observed in certain settings, such as in a particle accelerator, axions rarely collide with other particles. They tend to pass through them, which explains why scientists have found it difficult to prove that they exist.

“You can think of axions as ghost particles. They can be anywhere in the universe, but they don’t interact strongly with us so we don’t have any observations of them yet,” said study co-author Raymond Co, a postdoctoral researcher at the University of Minnesota.

Axions have an incredibly low mass. They are also believed to be a lot like neutrinos, subatomic particles that carry no electrical charge and only interact with gravity and weak force.

Neutrinos are extremely light with nearly no mass, so they travel at nearly the speed of light. These particles are produced when neutrons collide inside neutron stars –remnants of giant stars that collapsed after exhausting their fuel.

Safdi and colleagues think that axions can be produced in the same way as neutrinos as a byproduct of colliding neutrons and protons inside neutron stars.

To investigate their theory, they used supercomputers at the University of Michigan and Lawrence Berkeley National Laboratory to model the interior of a neutron star and predict how many axions can be produced inside the star.

In their paper, the researchers said that axions could be produced within the interior of the stars. Just like neutrinos, axions can also travel outside of the star because of their weak interaction with matter.

Safdi and colleagues said that the subsequent interaction of axions with the strong magnetic field surrounding the Magnificent Seven stars could transform the particles into photons that make up the x-rays that telescopes can detect.

They think this can explain the mysterious extra high-energy x-rays that were first observed in Magnificent Seven in 2019.

All stars in the cluster generate powerful magnetic fields, but they generate low energy x-rays and ultraviolet light unlike many neutron stars. These characteristics make the star cluster a favorable place to look for axion particles because it is easier to look for small streams of other forms of light.

Safdi and colleagues have checked for other objects behind the neutron stars but found nothing to account for the observation. They now suggest that the hypothetical axions could explain the excess of hard x-ray emission in the 2–8 keV energy range from the Magnificent Seven stars.

“No conventional astrophysical explanation of the magnificent seven hard x-ray excess exists at present. We show that the hard x-ray excess may be consistently explained by an axion-like particle,” the researchers wrote in their study.

Given its weak interaction with matter and its incredibly low mass, the axion has become one of the most feasible candidates for dark matter that scientists attribute for the missing mass in the universe.

Astronomical observations suggest that the visible matter that makes up the stars, planets, and galaxies represent less than one-sixth of the total mass of all matter in the universe. The scientific community generally agrees that around 80 percent of the mass of the universe is made up of dark matter.

Dark matter cannot be observed directly because it does not emit light or energy. No solid evidence of dark matter has been detected to date, but researchers infer its existence based on its gravitational effects on visible matter. They think that dark matter is behind the unexplained motion of stars within galaxies.

Individual axion particles may have low mass, but the Big Bang may have produced enough of these particles to constitute all the dark matter in the universe.

“A whole lot of the early universe’s energy gets dumped into these particles,” University of Washington physicist Gray Rybka previously explained to the Discover Magazine. “And because they don’t interact very much with anything else, you’d have all this leftover matter kicking about the universe.”

Safdi and his team clarified that their study did not definitely establish that the axion exists. For one, they used data from the European Space Agency’s XMM-Newton and NASA’s Chandra X-ray Observatory. Both are not sensitive enough to observe other signals coming from the axion.

The researchers acknowledged that the signal they observed could be a new astrophysical process in the neutron star.

Still, if the elusive axion does exist, its discovery is anticipated to revolutionize particle physics and give scientists a better understanding of dark matter and the universe.