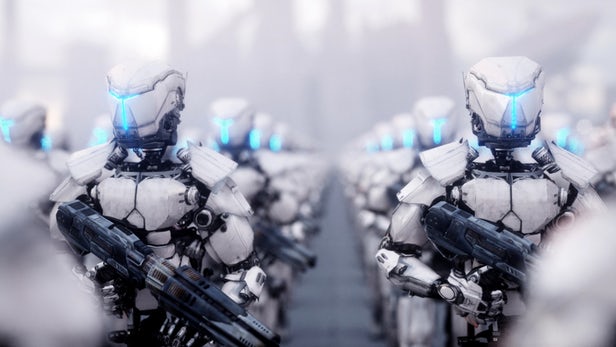 To Preserve Our Humanity, We Must Ban Killer Robots

Adystopian nightmare, in which machines make life-and-death decisions on the battlefield or in policing scenarios is not far away. It’s not Skynet or Cylons—at least, not yet—but the development of weapons with decreasing amount of human control is already underway.

More than 380 partly autonomous weapon systems have been deployed or are being developed in at least 12 countries, including China, France, Israel, South Korea, Russia, the United Kingdom, and the United States. South Korea deploys mechanized sentries in the demilitarized zone, while Israel’s Iron Dome detects and destroys short-range rockets. US missile-defense systems like the Patriot and Aegis are semi-autonomous, and the US military has completed testing of an autonomous anti-submarine vessel, which is able to sink other submarines and ships without anyone on board. The United Kingdom is developing Taranis, a drone that can avoid radar detection and fly in autonomous mode. Russia has built a robot tank that can be fitted with a machine gun or grenade launcher, and has manufactured a fully automated gun that uses artificial neural networks to choose targets. China is developing weapon “swarms”—small drones that could be fitted with heat sensors and programmed to attack anything that emits a body temperature.

Read more at The Nation