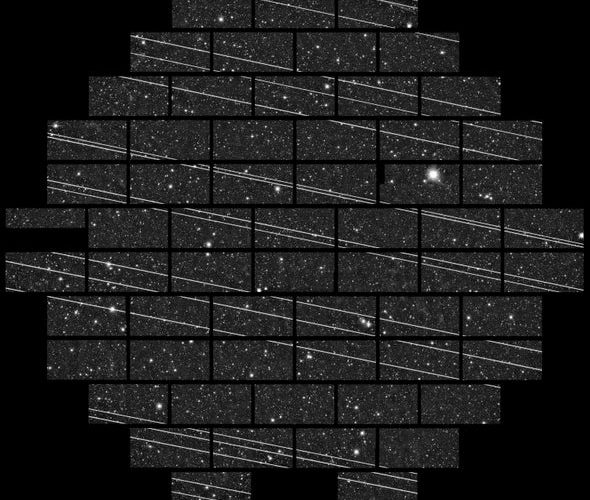 SpaceX’s Dark Satellites Are Still Too Bright for Astronomers

Starlink, a “megaconstellation” of hundreds of Internet satellites launched by the aerospace company SpaceX, has been causing headaches for astronomers by outshining celestial objects. Set to eventually include tens of thousands of spacecraft beaming high-speed Internet to the entire planet, Starlink has a downside for stargazing: the satellites reflect enough sunlight at night to be seen clearly with the naked eye (not to mention sensitive telescopes). Their brightness is only accentuated by the long trains they are arranged in, which pass across the heavens like dozens of glowing beads on a celestial string.

Ever since the first 60 Starlink satellites were launched in May 2019, 655 more have been placed in orbit, affecting a number of astronomical observations. Each launch has steadily held around 60 satellites, with one or two batches going up each month since January—the last did so on September 3.

Finally, in August—after more than a year of complaints from the scientific community and damage-control efforts from SpaceX—the National Science Foundation (NSF) and the American Astronomical Society (AAS) released a report on the situation. It drew from discussions among more than 250 experts at the virtual Satellite Constellations 1 (SATCON1) workshop earlier this summer to provide recommendations for both astronomers and satellite constellation operators in order to minimize further disruptions.