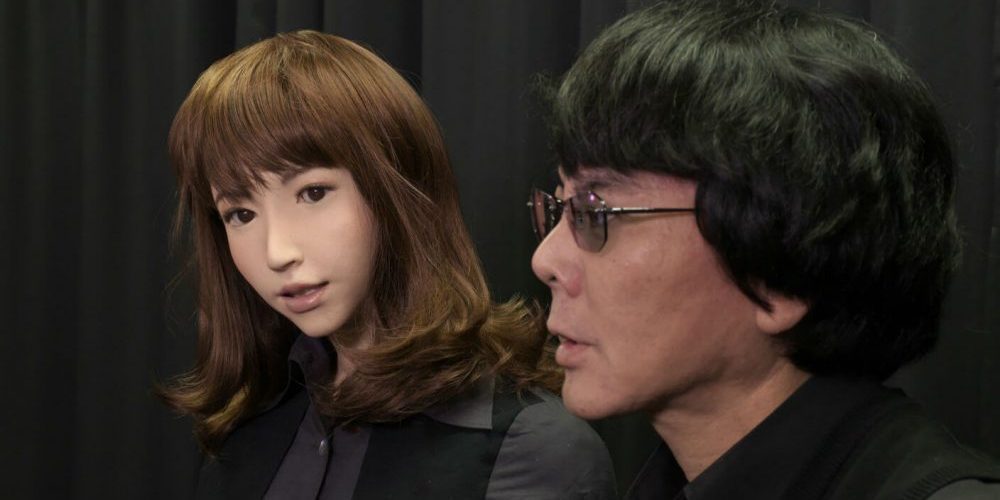 Imagine the world a hundred or so years in the future. Assuming that the human race hasn’t done anything like colonizing another planet or going nomadic and living in spaceships, someone could be waking up in a digitized world, stepping out of the bedroom to be bid “good morning” by another person, perhaps even a companion. Perhaps a future where this companion is not one born of blood but forged of steel isn’t all too radical an idea now, as much as it may have been a half-century ago. As western civilization has become more apathetic, less fearful, perhaps even more forward-thinking, it finds itself marching towards a future it had written and shrank from for many a year: A future where, just maybe, creation was not just a thing to be worshipped but to be done. As humanity marches in the direction of discovery, there are as always a few progressive minds leading the push towards the future. In the field of robotics, chief among these minds is Professor Hiroshi Ishiguro of Osaka University’s Intelligent Robotics Laboratory.

Prof. Ishiguro is one of the leading researchers of what he calls the “human presence”. The professor’s theory is primarily that the essence of humanity can be applied to robots, allowing them to be treated as living beings, opposed to the more common belief that robots can only be seen as machines to be used. Despite the stigma his research faces, Ishiguro has produced 12 humanoid robots, ranging from teleoperated devices and basic motorized frames to fully mobile and nearly human robots. The latest of the professor’s projects, the android Erika, even made an appearance on an Osaka news broadcast as an anchor.

Though humanoid robotics is already a technology considered to be futuristic inherently, members of Ishiguro’s research team, both other professors and students alike, believe there is a bright future for the technology in not-so-long. Part of Ishiguro’s work is to make robots safer to work with and more comfortable to live with. He believes that, in the near future, robots will play an integral role in the care of the elderly, the education system, and the operation of information and communication systems.

While, at present, robotics is a strongly industrial-centric field, Facebook has begun using bots to detect suicide risks, and numerous institutes and organizations have made great strides towards allowing robots to engage in smooth movement, like Boston Dynamics’ android “Atlas”, who is now capable of parkour. With the growing pace of development and progress in the fields of concern by roboticists, being recognition of emotional stimuli and locomotion, it is very possible that Ishiguro and his colleagues could reach the precipice of a true synthetic human by the end of the next decade.

Robotics research, especially humanoid, has been highly shunned with logical reasoning. Such technology as robotics could easily replace humans in jobs like the assembly line, and a synthetic human could very well take the places of teachers, retirement home workers, therapists, public transport drivers, restaurant workers, and jobs that require less active thought and problem-solving skills. The usual argument is that robots require maintenance personnel; A growing robotics economy could cause a shift towards mechanical engineering and programming skill sets. Another argument against the progression of synthetic humans is that they could easily become hostile or otherwise harm society. However, many proponents of Ishiguro’s research insist that unless preprogrammed to do so, a synthetic cannot become hostile unless it is advanced enough to be able to feel, and as such, when treated with due respect, would not go so far.

But the arguments against the advances do not stop there. Philosophically, some believe that a synthetic human violates religious terms and is an affront to humanity and its roots- This is part of the reason Japan has been so accepting of robotics, to the confusion of many other nations: Religion. In accordance with the traditional religion Shinto, the belief that all things, animate and inanimate, contain an inherent presence is prominent in Japanese culture. This forms the core of Ishiguro’s project: As he says, these synthetics are just as capable as humans to have a soul.

This idea is cosigned on by British photographer Luisa Whitton, who wrote that the first of Ishiguro’s androids had “a real sense of melancholy” when she met with it, as the android had become obsolete. Ishiguro calls this effect “Sonzai-Kan”, translating as “Presence” or “Existence”, and it appears to be an opposite effect of the sense commonly referred to as the “Uncanny Valley”. While the Uncanny Valley is characterized by an overwhelming discomfort that the being before you is an android, Sonzai-Kan is characterized by a heartfelt certainty that the same being has what can very much be called a soul.

A decade ago, the primary idea of a synthetic human was largely dominated by Terminator-styled, cold, emotionless killing machines meant to blend in. However, as an increasing sentiment of acception grows in younger generations, the form of a synthetic human has become one much more personable on account of people interacting with artificial intelligences on a daily basis. As an increasing number of favorable representations of humans and robots appears in the community, an idea that once sparked fear or disgust has become associated with a bright future, one of solidarity and comfort.