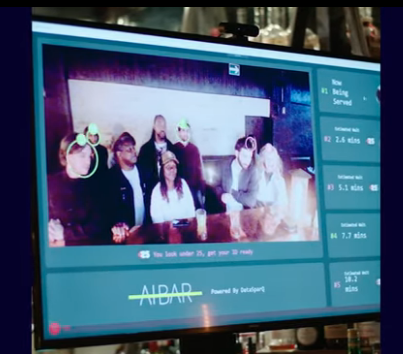 The Harrild & Sons bar in London describes its basement cocktail club, 5cc, as “our little secret down below.” But 5cc Harrild & Sons has a little secret of its own: It’s using facial recognition software to keep an eye on its customers, make sure they’re old enough to have a pint, and ensure that they’re not shoving people out of the way before they order their next round.

Well, it’s probably more accurate to say that 5cc Harrild & Sons had a little secret, because DataSparQ, the company that designed the software, is talking about how it worked during a recent trial at the bar.

The artificial-intelligence-powered system was used to scan drinkers’ faces, use biometric data to determine whether they looked younger than 25, and then prompt the bartender to ask for ID. The company also claims that its tech speeds up wait times, because it automatically assigns a number to each customer so the ‘tenders can just look at an iPad screen to determine who’s next.

“Queuing is a part of British life that we all have to endure—but we wanted to do something to improve the experience,” John Wyllie, DataSparQ’s managing director, said in a statement. “It’s the uncertainty of waiting times alongside queue jumpers that’s adversely affecting consumer behaviors in bars and pubs. The AI Bar ensures it’s a hassle free, first come, first served system that makes ordering drinks more convenient for both drinkers and bar staff alike.”