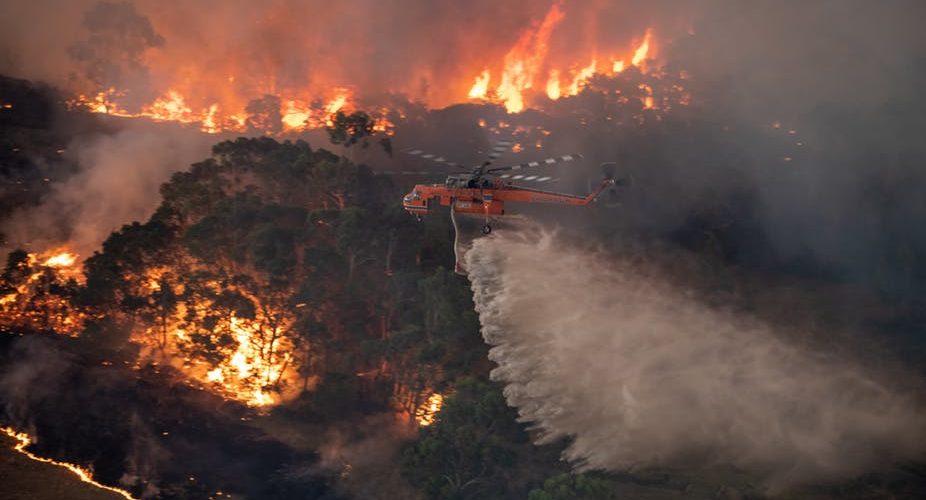 Australia braces against one of its worst bushfires in history.  The country is prone to bushfires during its dry season, but the devastation caused by the current fire season is unprecedented on many aspects. Foremost is the geographic spread of the fires.

The severity of the Australian bushfires is due to several factors – many of which are tied to global warming. Australia experienced its hottest year on record in 2019, with temperatures reaching 1.52 °C higher than the 1961-1990 average. Scientists also believe that the climatic conditions in Antarctica and the Indian Ocean contributed to the uncontrollable blazes.

The fires threaten to make a lasting impact. Since September 2019, the fires have burned about 17 million hectares, an area larger than the state of Washington. The disaster also killed at least 29 people and damaged or destroyed more than 2,600 homes. This fire season is likely to leave lasting impact not just on Australia, but to the whole world.

Climate And The Environment

The role of climate change on the Australian bushfire remains a subject of debate, but rising temperatures coupled with decreasing rainfall can dry up the land, trees and plants, converting them into fuel that can worsen fires when they break out. The fires that broke out in Australia have also been fueling climate change as trees and plants that burn release stored carbon. The fires have already released about 400 megatons of carbon dioxide into the atmosphere, exacerbating the world’s rising temperatures.

NASA said that the smoke from Australia’s fire have already travelled the world, explaining that the recent blazes had been so big they produced unusually large number of  fire-generated thunderstorms that sent smoke soaring into the stratosphere.”Once in the stratosphere, the smoke can travel thousands of miles from its source, affecting atmospheric conditions globally,” NASA said in a statement.

The space agency is still studying the effects of the smoke at higher altitudes, but it already observed that the smoke changed the color of the skies in South America and caused severe air quality issues and darkening of mountaintop snow in New Zealand.

On the ground level, huge quantities of ash that wash into dams, rivers and eventually the sea will pollute water supplies and threaten marine life. Ecologists warned that large expanse of lands being burned at the same time could have severe ecological consequences as this threatens millions of plants and animals.

“Across whole forests there are millions of individuals, and hundreds of different species in those forests that all rely on each other,” said Manu Saunders, an ecologist at the University of New England in Australia. “And if you lose one, it’s like a link in a chain, you then lose the others that it is connected to.”

Images of animals that were burned by the flames provide evidence of how the bushfires impacted wildlife. Chris Dickman, a biodiversity expert at the University of Sydney, estimated that the number of animals in New South Wales alone that were killed in the bushfires are upwards of 800 million. On a national scale, the fires impacted more than one billion animals. The animals that survived continue to face threats of death as a result of the destruction of their natural habitat, where they rely on for food and shelter.

Stuart Blanch, a forest and woodland conservation policy manager at the World Wildlife Fund-Australia, said that while animals generally recover, there are concerns that entire species or subspecies have been wiped out by the disaster.

“Ecologists have much lower confidence that wildlife populations — particularly the 1,000 threatened species across the continent — will recover from such widespread and utter forest devastation,” he said, according to NBC News.

It matters when animals go extinct because it disrupts the Earth’s ecosystem. The loss of predators can impact the populations of their prey, which can lead to dramatic changes in the ecosystem and the food web.

In the case of Africa, for instance, the decline of lions and leopard populations led to a surge in the number of olive baboons. Large number of baboons then invaded human settlements, where they spread intestinal parasites to humans. In Utah, fewer cougars led to an explosion of deer, which ate more vegetation, altering the path of local streams and impacting overall biodiversity.

The extinction of pollinators such as birds and insects can also impact the dispersal of seeds, which could affect the availability of plants on which many animals in the food chain -including humans – rely on.

Australia is one of the top food exporters in the world, exporting 16 percent of the beef and 11 percent of wheat traded internationally. It also exports dairy, cereals, nuts, fruits and vegetables. The fires have claimed farmlands across the country and thus affect the meat and dairy industries. Dairy farmers who assessed their losses relative to the number of cows left and the availability of grazing land, much of which has been ravaged by the blazes, also fear a cheese and milk shortage. According to the  Meat and Livestock Australia, close to 80,000 livestock properties have already been destroyed by the bushfires.

Besides damaging the crops and killing livestock, the flames also destroyed infrastructure and farm tools. In areas where farmlands were spared, heat threatens food production as it damages fruits and vegetables. Logistical issues as food routes were destroyed also threaten the food industry.

“The ongoing fires that are devastating many parts of the country have impacted on supply of some vegetables due to both farm damage and creating logistical issues in getting product to consumers,” said Shaun Lindhe, a spokesperson for industry body AusVeg.

“There have been reports of highways being closed for periods of time which have caused issues getting product to consumers, as well as power outages, which can affect cold store facilities, picking and packing.”

Since Australia is the second largest exporter of beef and veal in the world, prices of meat could go up.

As the devastation continues, scientists and environmental advocates hope that the Australian bushfire could lead to positive changes in climate policies, not just in Australia, which account for 1.3 percent of the world’s total greenhouse gas emissions, but worldwide.

The Emissions Gap Report issued by the UN Environment Programme (UNEP) in November warned that global greenhouse gas emissions should fall by 7.6 percent each year from 2020 to 2030. Otherwise, nations will fail to achieve the goal of the Paris agreement to keep global temperature increase within 1.5 degrees Celsius. If temperatures continue to rise beyond this threshold, Earth could face more catastrophic changes.