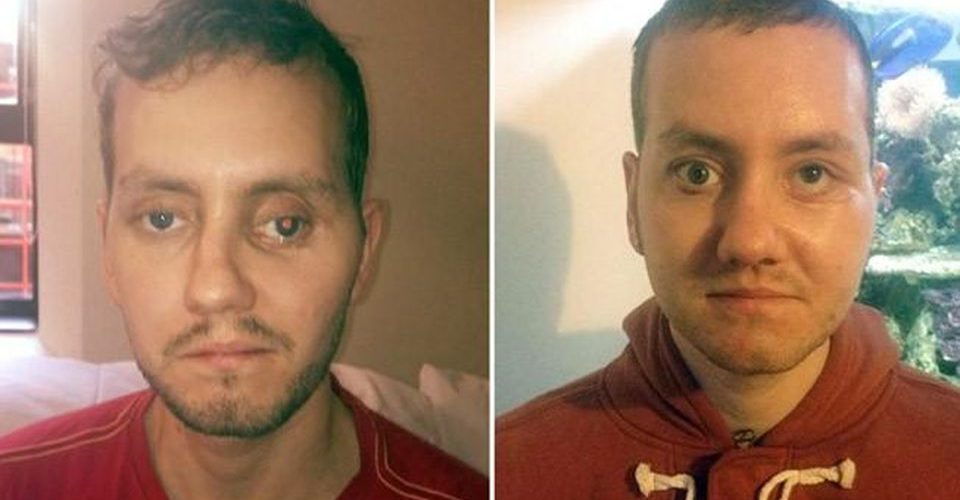 TSS EXCLUSIVE – About Face: The Future of Face Transplants

The Man With The New Face

Fifty kilometers per hour. Perhaps, not even that. But the way the motorcycle took to the curve, barely adhering to the rain slicked pavement, should have been warning enough that it was not the time for speed. Stephen Power whipped through his familiar Cardiff streets without a helmet. The law of entropy, or perhaps everything in the universe, acted against him in that one moment of daring. The motorcycle launched him from his seat like a missile, and his skull was crushed in the ensuing carnage. That was 2012.

Fast forward to 2014 where the brilliant minds over at Morrison Hospital in Swansea, UK have combined the best bits of science fiction with science fact, not only to give Mr. Power a new skull, but to give him a completely new face. This isn’t something jumping from the pages of a Marvel comic, a scene from Total Recall, nor a rerun of “The Six Million Dollar Man”. This is a flesh-and-blood man with a face fitted from 3D printed technology. The blueprints to his design sit comfortably in the London Science Museum for all to marvel at, and are even available online in the form of 3D printable plans so the exhibit can be printed remotely.

Power’s story was a remarkable feat of engineering, science, and creativity undertaken by The Centre for Applied Reconstructive Technologies in Surgery (CARTIS). First, CT scans mapped out for the surgeons just how to reconstruct his shattered cheek. Then, a 3D printed titanium implant holding all the bones in place and a reconstituted eye socket were coupled together to give Mr. Power his new face. He’s been fortunate his immune system hasn’t rejected his overall face transplant.

Dr. Dominic Eggbeer, Head of Surgical and Prosthetic Design at CARTIS, said at the time, “As part of most projects, the specialist design engineers sit with the surgeons and prosthetist, and view the patient’s CT scan data in 3D on Geomagic Freeform.” It acts as a sort of pre-surgery that greatly reduces the time spent in the operating room and offers hope for a number of complicated surgeries going forward. In some of these cases, patients are able to regain their lives after much less time than earlier expected. Powers’s own surgery only took eight hours.

Power’s remarkable story of recovery is considered relatively old news when compared to that of Cameron Underwood’s. In 2016, Underwood lost his nose, most of his lower jaw, and all except for one of his teeth, from a self-inflicted gunshot wound in a failed suicide attempt. For two years, Underwood grappled with the psychological and physical trauma of regaining his life while living with the devastating facial damage he endured.

It wasn’t until January 2018 that Dr. Eduardo D. Rodriguez led a team of more than 100 medical professionals at NYU Langone Health in a twenty-five-hour operation to reconstruct Underwood’s face. It was the second such surgery of its kind for the team and the beginning of a long road to emotional, physical, and psychological recovery for Underwood. The donor was twenty-three year-old chess champion Will Fisher. Much like Underwood, Will had succumbed to a long battle with mental illness. His mother wanted to honor her late son’s legacy by donating Will’s face to Underwood.

Leslie Bernstein, the administrator for NYU’s face transplant program, believes that Underwood’s surgery was the first of its kind in the United States to essentially be covered by commercial insurance. When speaking to Time Magazine of the $1.5 million surgery, Bernstein said, “Any time an insurance company signs on to accept a new, successful type of event, we hope, and we have seen in the past, that it does open doors for more patients, like Cameron, to seek care where they otherwise might think that they have no options.” While insurance covered roughly one third of the medical costs, the rest was paid for by grants and philanthropists.

From Transplant To Graft

Both Underwood’s and Powers’ surgeries are success stories that combined the latest advances in the field to give them new faces. However, with more than thirty transplant surgeries in, scientists have yet to counter the obstacle of tissue rejection, much less the gargantuan costs of funding. In the majority of transplant cases, the patient has lived with their facial injuries for a number of years before undergoing the risky surgery. Underwood was fortunate insomuch as his transplant was within a short window after his suicide attempt. But for patients who have aged with their devastating injuries, adapting donor transplants some time well after the onset of the accident and/or disease can be riskier and less effective, so scientists have been looking at other options.

The ever-evolving treatment of coupling skin grafts with stem cell regeneration has been heavily looked at as a means to eventually create perfect organ transplants, including face transplants. One such example has been the miracle story of what Dr. Michele de Luca did to save the life of a young boy suffering from a rare skin disease. While organ transplants always run the risk of tissue rejection and/or infection, Dr. de Luca seems to offer up the rare case where it did not end poorly.

Dr. de Luca used a whole body graft of genetically modified stem cells to treat a boy’s nearly fatal case of epidermolysis bullosa, a group of genetic conditions that cause the skin to be very fragile and to blister easily. Dr. de Luca took a very small piece of the boy’s unaffected skin from the groin, infected its stem cells with a properly functioning iteration of the LAMB3 gene to counteract the disease, and grew sheets of healthy cells. They covered the boy’s arms, legs, back and torso with healthy skin. And the boy’s new skin regenerated healthy unaffected skin to over 80% of the body. As a result, Dr. de Luca was hailed in 2016 and 2017 as a visionary pioneer in the field, and a greater push for more work in this vein has grown.

However, inserting a retrovirus into cells comes with the huge risk of developing cancer. Dr. de Luca’s patient was a success story. But there are countless other trials that were not so fortunate. One in particular recalls where a group of children developed leukemia after their cells were infected with a retrovirus.

And that’s yet another reason why the complicated idea of growing lab tissue (not skin grafts) has grown legs. Just like any other organ transplant, the skin transplanted in a “traditional” face transplant is coming from another donor. That means the patient’s immune system may ultimately reject the transplant. The patient will require immunosuppressive drugs for life in order to resist the threat of infection, tissue rejection, tumors, cancers and a long list of maladies that come with such a high risk surgery. Powers and Underwood must regularly see their surgeons to track the evolution of their respective transplants. Dr. Rodriguez projects it will be at least 3 years before Underwood’s face is fully “pristine.”

A Theory Grown In A Lab

Imagine growing skin in a lab from the very same patient, and imagine that the lab-grown skin can ultimately regenerate a new face. That’s where the brightest minds in the field hope advances in science and technology will lead us.

But, how do we make the jump from the risky donor-driven transplant surgeries that account for cases like Powers and Underwood to using our own skin? The idea of the face transplant going forward is to take human pluripotent cells from a skin biopsy, reprogram them to generate as epidermal and dermal cells, and grow them in the vast numbers needed to create complete skin.

However the idea of producing the amount of cells necessary to create skin is still decades into the future. Currently, researchers are looking at using automated robotic platforms for conversion of skin biopsies to pluripotent cells in much larger numbers. The hope is to create the volume ultimately necessary for something as complex as a face transplant or other intricate procedures. And, so far, the results have yielded a rather promising amount of pristine cells. There is also a push in the direction of bioreactors which also look at tackling the volume question. In a controlled study, the bioreactors generated more than 80% purity for the batch rendered. Both are solid steps to eventually growing full organs like a face in the lab. However, the jump from a small batch of skin cells to a fully grown face is decades away.

The man with the new face is no myth. If anything, the future of face transplants has arrived…in theory. If anything the most promising research suggests lab grown organs will be a reality. For the moment, the scientific community is taking baby steps with organoids and small batches of lab grown cells. Recently, scientists were able to grow a human esophagus in lab from pluripotent cells. It is a first for scientists and could lead the way to treating rare diseases and disorders. It could even build a blueprint for where doctors go in generating full face transplants in lab.

In the meantime, the scientific community remains cautiously optimistic. As the technology and funding sources advance, so will the practicality of face transplants becoming a normal procedure in the future.

Akil Wingate is a writer, filmmaker, and explorer.