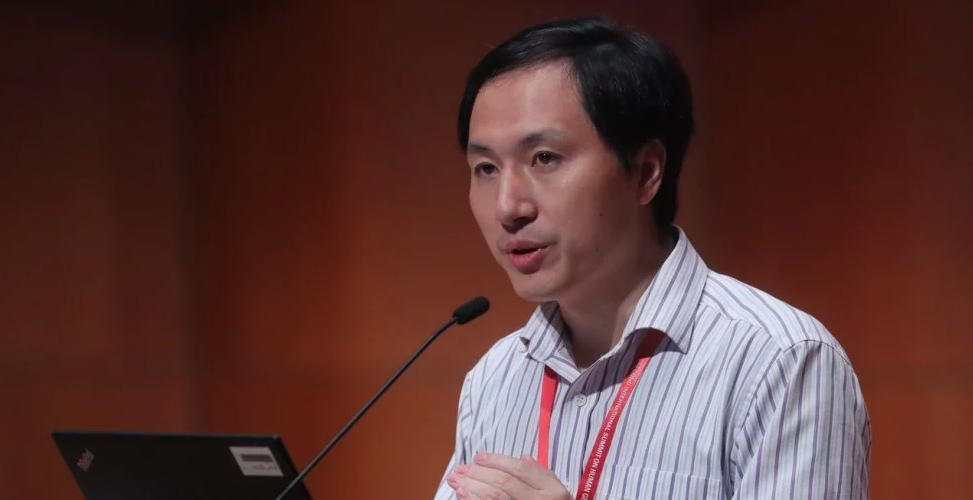 At a glance He Jiankui seems like the likable, easy-going college professor students find themselves at ease with. He seems like the lecturer who talks about upcoming exams with a soft reassuring voice and an intimate nature, lifting any freshman anxiety going forward into midterms. The father of two girls seems soft-spoken and gentle. And yes, he’s understated.

And on this particular occasion, he’s dressed casually in a soft creamy blue button down shirt. A crush of centrifuge machines and microscopes loom behind him. And a few other researchers flit about the laboratory frenetically, hovering over petri dishes and inspecting their progress. Meanwhile Professor He, for his part, sits so comfortably, one might think he’s about to spill into locker room talk with his fellow researchers. Only thing is in just one week that locker room talk will turn out to be the kind of bombshell that sets the world of biomedical research upside down. And the Associated Press was all ears with cameras rolling when the Southern University of Science and Technology in Shenzhen Professor announced the unimaginable.

Professor He claims he’s created the world’s first gene-edited babies, saying, “I feel a strong responsibility that it’s not just to make the first but also to make it an example.” And like that He’s seeming innocent, almost boyish appearance melted away instantly. He claims that he edited seven couples’ embryos for IVF fertility treatment. He gave the resulting pair of newborn babies, “Lulu” and “Nana,” a resistance to HIV infection using CRISPR’s “molecular scissors” to cut away the trait that would otherwise leave the babies vulnerable to infection.

Though the study has yet to be verified much less confirmed independently, He claims to have used seven couples in which the father is HIV positive and the mother HIV negative. So far, only one couple has given birth. Yet, He cavalierly intimates that they won’t be the last. And the two newborns apparently have been gene edited to resist HIV infection. While their real identities remain a secret, Professor He promises to monitor the newborns for 18 years, looking out for any abnormalities, mutations, or resulting illnesses such as cancer, that still might pose a possible risk.

So what’s all the fuss about? Gene editing though in existence since 2012, still is relatively new territory both on practical grounds and ethical ones. Most countries ban gene editing in embryos for human reproduction. However, scientists can research gene editing in discarded embryos as long as they follow through on destroying the embryos just after the research has been carried out. China for example explicitly requires scientists to discard the embryos within 14 days of the research.

Most scientific communities would agree that the risks involved with gene editing include abnormalities, cancers, and mutations. And what’s more? The DNA changes written, cut or paste into the genome could pass on to subsequent generations. While cutting away a defective trait and inserting a good trait might alleviate one risk, there is evidence to suggest doing so might create other risks. So far it’s only been pursued in grown adults where the trial remained in the patient himself. But moving into the territory of yet unborn babies in order to create “designer babies” is not only risky but it also treads murky ethical waters.

Further to that, in 2018 the Nuffield Council on Bioethics in the U.K. released an independent inquiry into what the protocols should be before carrying out any kind of gene editing trials, stating essentially that a global body should oversee, monitor and dialogue on such trials in collaboration with human rights organizations like UNESCO. The U.S. National Academies of Sciences, Engineering, and Medicine also released a report in 2017 suggesting that any such trials take place only after thorough peer-reviewed pre-clinical research outlines any risks involved, strong justification is established in the case that no alternatives exist, and across the board transparency is made available.

So how did Professor He, along with a seeming covert team that included a US scientist, manage to secretly source 7 willing couples, gene edit each couple’s respective embryos, and ultimately see a couple carry two babies to term without ever catching the watchful eye of the Chinese government much less the larger scientific community? Something this unprecedented and of this scale doesn’t just float under the radar. So naturally this was just one of the many burning questions the packed house of scientific peers, journalists, government officials and general public launched at He during his appearance at the Human Genome Editing Summit at the University of Hong Kong. In fact, He remained vague and elusive when it came to giving up the goods about his work, other than saying he was “proud” to have altered “Lulu” and “Nana’s” genomes.

But Professor He seems to have anticipated the fallout from his peers, having filmed something of a PR video in his laboratory explaining why he’s done this. “You may wonder why we used gene editing surgery to prevent HIV. Why not another lethal disease? First, safety. Second, real world medical value…Protecting against HIV requires the safest of gene surgery, which is to remove just a few gene letters. Correcting a broken gene, while helpful, for more familial diseases like cancer and muscular dystrophy is more complex.”

He’s claims that the surgery is simple in contrast to one that might correct code vulnerable to cancers and muscular dystrophy didn’t fall lightly on the ears of his peers. In fact, hundreds of Chinese scientists signed a letter of condemnation. Noted stem cell and cancer researcher and dean of Harvard Medical School Dr. George Daley was in attendance at the Summit and gave his thoughts on Professor He’s revelations to NPR. “I think the international consensus is that the more appropriate interventions would be to eradicate horrendous, life-threatening diseases like Huntington’s or Tay-Sachs or sickle cell anemia.”

Daley goes on to say that He’s announcement speaks to a larger question of unethical behavior.

“I think the discussion has been universally condemning of this approach. And it surfaced as well in the discussions that this gene, CCR5, while it is related to HIV, it’s also been shown in mice at least to be related to learning and memory. So this in fact could be the first case of an attempt to engineer a baby with enhanced learning and memory, which would be an enhancement.

And that raises all kinds of questions about how that technology is going to be used. Is it going to be distributed equitably, or is it going to be exploited by particular populations for their own advantage? This is part of the discussion that was I think particularly concerning around this intervention.”

While the case has yet to be peer-reviewed, He claims to have gotten feedback of his trial from several reputable and respected scientists in the community. He won’t go so far as to name anyone who has had a peek at his work. Thus the jury remains out as to whether or not this is real or imagined. The University of Science and Technology in Shenzhen says that He has been on placed on leave since February 2018, and the Chinese government has launched an ethics investigation into his claims. Coupled with the recent news that He has disappeared, it will be interesting to monitor the scientific community’s response.